There are plenty of reasons to feel stressed given the political climate, terrorist attacks, natural disasters, environmental devastation and an unending stream of dreadful news. Anxiety stemming from a continuous diet of upsetting news can make you feel helpless, which only exacerbates stress.

When stress builds, the stress hormone cortisol surges through your body, wreaking havoc on body, mind and spirit. You have to take back control by being proactive. Robert Sapolsky, professor of neurological sciences at Stanford University and author of “Why Zebras Don’t Get Ulcers,” claims we have a lot to learn about stress from studying animal behavior. But, unlike other mammals, humans can turn on the stress response with memories, emotions and thoughts. This provides humans with a never-ending stream of opportunities to experience stress.

In his latest book, “Behave: The Biology of Humans at Our Best and Worst,” Sapolsky tells us that experiments involving stressing-out lab rats in a cage suggest ways humans can manage stress. Such experiments show that rats are less vulnerable to stress if they have something to distract themselves and have buddies. Having an outlet for stress-induced frustrations, such as a hobby or a bunch of pals, is a good stress buffer. Rats are also less vulnerable to stress if they get predictive information and have a sense of control, but there are some caveats.

With predictive information, timing is everything in order to be protected from stress. A rat doesn’t get an ulcer when it gets a 10-second warning before it’s shocked, but if the warning light goes on one second before the shock occurs, it has no positive effect because there isn’t time to adjust anything. If the warning light comes two minutes before, that makes it worse because the rat is waiting too long in anticipation — “Here it comes, here it comes …” For predictive information, there’s only a narrow window where it helps.

Mild vs. Moderate vs. Major Stress

You might be surprised to learn feeling a sense of control only works when dealing with a mild to moderate stressor, but can backfire with major stressors. With lessor stressors, you know how much worse it could have been and can imagine that you had control over that improvement. But if it’s a major stressor, like an illness diagnosis, you don’t want to have an inflated sense of control because then it sets you up to think it’s all your fault. In this case, what you really want is to minimize your sense of control by putting it in perspective and relinquishing a sense of responsibility. Feeling in control is only a protective shield against mild to moderate stressors — it can make it worse for major ones.

Social rank can also be a source of stress, especially where rankings are unstable and people are jockeying for position. But social rank is not as important as social connection. Sapolsky maintains if you have a choice between being a high-ranking baboon or a socially-affiliated one, you should definitely pick the one with friends, neighbors and family, not the one with power, because that’s the baboon who’s going to have a healthier, longer life.

What are the Implications for Humans?

You are more likely to feel stressed if you:

The flip-side is what you can do to manage stress. You can:

When stress strikes, the strategies you have, or develop, for managing it will determine how effectively you’ll be able to cope. Unmanaged stress can cause mayhem in your life. The more proactive you are in putting into practice stress management strategies, the more successful you’ll be in keeping stress from running amok.

About the Author: Dr. Barbara Larrivee

Dr. Barbara Larrivee is an educator, researcher, author, and workshop leader. Her latest book, A Daily Dose of Mindful Moments: Applying the Science of Mindfulness and Happiness, is about weaving mindfulness into daily life with “mindful moments”—brief, research-based practices drawn from decades of research in mindfulness, positive psychology, and neuroscience. 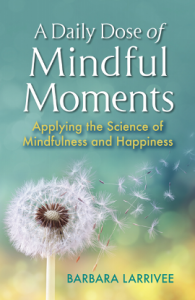